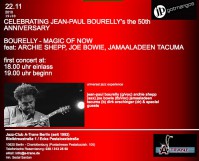 I am honored and excited to announce that my friends Archie Shepp, Jamaladeen Tacuma and Joe Bowie are coming to play with me on the 22 Nov to ring in my 50th birthday at the A-trane. I can’t think of a better way to begin the next half century.

I first met the legendary Archie Shepp in 1998 when when we played together at popkomm in Koln. My brother Carl and I used to listen to his records when we were kids. My favorite songs was called “Steam” and Archie and I played that song in that first Koln concert. Later we got the chance to collaborate in a wonderful way on my record Boom Bop.

The amazing Joe Bowie I first heard at the Peppermint lounge in New York with his group Defunkt. In those days all the guitar players wanted to get into that group because he was known to give the guitar space to expand and with Joe as the front man, it was clear they were destined for stardom.
He invited me later at New Yorks Knitting Factory, to record the  Defunkt Special edition, “Tribute to Muddy Waters”.

My friendship with the irrepressible Jamaaladeen Tacuma started out in Philadelphia in 97 after a European tour with the recording of the group Brotherzone. Tacuma makes everyone just sound better. He is one of my favorite bassist of all time, mixing R&B with Jazz with harmolodic vibes that always keep his bass ideas cooking.

As for me Jean Paul Bourelly, I’ve been known as a force in new funk forms and I love to mix musical genre’s so this evening will surely turn into a high energy, multi dimensional groove party.