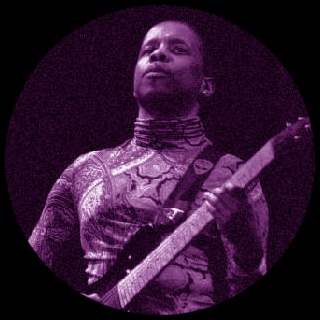 Jeff Lee Johnsons music is a gleaming example of a guitarist who moved seamlessly through the traditions of the blues, r&b jazz and freeform treating them all as one extended language yet housing those ideas cleverly in a pop structure format that allowed it to travel well. Jeff Lee’s music carried the sonic signifiers that ones ear was accustom to if you were aware of the rich arch of important American music. One could hear Watt stacks, Texas Blues, Memphis blues , Prince, Wes Montgomery, Hendrix with a twinge of the rural heartland.

Yet he still possessed that wide perspective that stretched from the chaotic surges, reminiscent of  Sonny Sharrock superimposed over verses filled with playful, bitter, sweet irony,”

“It got thumbs up, It got five stars, It got that nod now, Ev’rybody wants one”

” It ain’t Hard for you, You just sail on through”.

His chordal movements had a sentimental touch to them, yet stayed firm and never fell into the syrup bowl. He above all was a voice on guitar who left a body of work of cleverly crafted songs that used popular forms to express his most intimate and urgent messages.

With his close friend on bass Reggie Washington and drummer Patrice Dorcean.

22nd of February in Paris, France at the festival Sons d’ hiver .

His music will undoubtable live on.   JPB