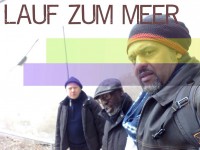 Abdourahmane Diop
A Griot holds responsibility with his music and poems, to hold true and report on the important things in society. Abdourahmane Diop is descending of a well known Griot family in Senegal and he brings this deep tradition and his expressive vocals and percussion into the group.
www.myspace.com/abdourahmanediop

Willi Kellers
Long time drummer of Peter Brotzman Kellers has also worked with many greats in the so-called New Music arena like Tony Oxley and Hans Ludwig Petrowsky. He hooked up with Diop and Bourelly through the their association with the critically acclaimed theater piece Lauf zum Meer, which featured the three on stage while engaging in some chaotic and whimsical inter-play. And so goes the name of this group.
www.willikellers.de

Jean-Paul Bourelly
Since living in Berlin, Bourelly worked with his longtime friend and musical collaborator Abdourahmane Diop on Boom Bop cd in 2001. This carried over into Diop asking Bourelly along to join in composing music for the theater piece Lauf Zum Meer . After a one year run of the piece, all three musiciansfelt that the music carried so much character and that their musical communication, so fluid, that they should continue the association as a performance ensemble. New Music, Africa hymes, blues roots and healthy doses of vivacious and charming interplay, make up the character of this group. Walk to the Sea
www.bourelly.com