This was a project instigated by producer Beat Kennel, who remixed tracks off of several of Jean-Paul Bourelly’s cd. After hearing the tracks Bourelly not being one for nostalgia suggested that they do a real project borrowing off of some of his  past works.

What came out of two night recording live in Zurich at Beats own Bazillus club, turned out to be CutMotion.

One night was dedicated to the funky side of things with Singha Dee (dr), Manu Rindlisbacher (b), Maze Salami (g), Juerg Gray (tp), Thomas Grünwaldt (b sax) and Michael Flury (tb). 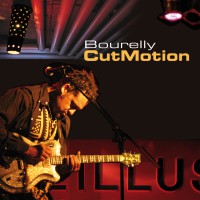 This cd springs into action already with the first tones, as if you are in the midst of a bubbling hot jam with Jean-Paul Bourelly’s blazing guitar taking center stage. The session was a collaborative brainchild of Bazillus founder Beat Kennel and Bourelly; Kennel who was a fan of Bourelly’s music set out to use some of Bourelly’s earlier BluWave Bandit grooves as the basis for some completely new music. They both decided at the end to just create a new session around some of those grooves.

To single out one tune or another is hardly necessary. The cd grooves relentlessly from beginning to end and leaves no one without sweating. You only have to imagine the stage and that will be easy once you put this cd on. Phat, and very bold. Bourellys guitar playing is (as usual) impressive and the band is super tight. The different musical styles of the two evenings end up deepening the the overall landscape.
Here and there (like on Funkatrail Line) one recalls the music of Defunkt in one of their good phases.

Bourelly Lives! And he continues to be good on disc and for this we can all rejoice!
Excerpts from Frank Bongers, Jazz Dimensions review