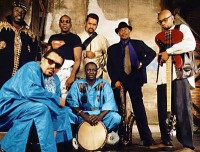 After more than a decade of providing some of the most riveting post-Hendrix guitar arsenals this side of Eddie Hazel, and a multifaceted career that includes working with the likes of Miles Davis, Cassandra Wilson, Muhal Richard Abrams and Lawrence “Butch” Morris, Jean-Paul Bourelly is still roundly ignored in jazz-critic polls. Nevertheless, not being in the spotlight has its advantages, such as being able to follow one’s creative sprit. Witness Bourelly’s latest album, Boom Bop, where he collaborates with a handful of Senegalese percussionists as well as iconic saxophonists Henry Threadgill and Archie Shepp, resulting in a visceral album of Afro-psychedelia that’s as passionate as it is probing.

Bourelly’s once staccato, Hendrix-inflected vocals give way to more of an elongated Afro-Arabian phrasing on Boom Bop, but Bourelly’s deep delta-blues roots are firmly intact as evidenced by the eerie “New Afro Blu” in which Bourelly sings of a deceitful lover alongside Diop’s fervid, chantlike singing. Other blues-drenched Afro-psychedelic charms include the percussive instrumental “Kinetic Threadness,” which features some fine alto work from Threadgill, the dreamy “Tara” and the thumping “Silent Rain.”

While it’s far-fetched that Boom Bop will make Bourelly a household name in the U.S, it will undoubtedly solidify his credentials as one of the most inventive and under-recognized guitarists of our time.

Bourelly’s excellent effort takes you into various jazz experiences. With African and mid-eastern beats and sounds, this album offers a different kind of musical experience. by John Murph